THE RIGHT AIRCRAFT FOR YOUR MISSION, WHATEVER IT MAY BE.

Those who perform special missions know that air access can be crucial for resolving countless situations. That is why TAM Executive Aviation maintains in its portfolio a complete range of multi-mission aircraft, specially made by the manufacturers Beechcraft, Bell Helicopter, and Cessna, and suited to diverse needs. 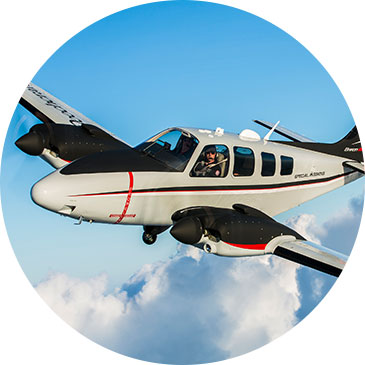 One of the safest and most reliable models on the market, it has an even more complete version dedicated to Special Missions. Thanks to its two powerful Continental IO-550-C engines, the Baron ISR boasts superior speed and can reach long distances in less time, which is a great advantage in patrol and surveillance missions, for example. Equipped with the latest infrared camera, communication systems, and data recording, among others, the model becomes an ally when it comes to security.

Known as Cessna's multi-mission aircraft, the Caravan also excels when it comes to Special Missions. This is the aircraft with the highest number of post-factory modifications (known as STCs) approved by the FAA and ANAC proportional to market time. This proves not only the flexibility of the configurations possible in the Caravan, but also its versatility.

Its interior can be configured to serve a wide variety of missions, whether to transport troops, police, or patients, or to transport ammunition, food, or medicine. The model also handles skydiving missions very well.

The Grand Caravan EX Special Missions is also certified for several ICU aerial solutions as it is able to contain a life support system, stretcher, boarding ramp, oxygen bottle, electric coupling, and incubator, among others.

Such versatility and reliability have made the Caravan one of the preferred aircraft of some of the world's leading public forces, including the US, Yemen, Argentina, Kenya, Colombia, Paraguay, South Africa, and Peru, among others. In Brazil, this model is used by the FAB (Brazilian Air Force), Federal Police, Military Police of Bahia, and the Governments of Pará and Paraná. 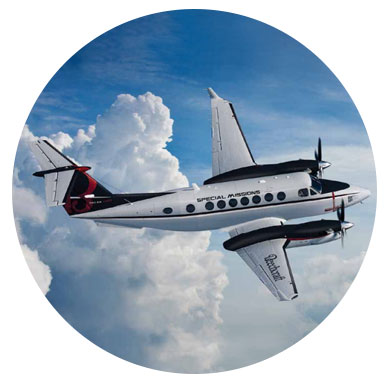 Proven flexibility on missions, accessibility, and reliability make the King Air 360ER the ideal aircraft for the majority of special missions. Its configurable interior perfectly accommodates passengers and loads, or can also be adapted for missions like aerial searches, ambulance, and surveillance, among others.

The ability to go anywhere without additional fuel tanks makes it the ideal model for missions that require traveling long distances. Its high durability engineering makes it perfect for the harshest environments, including extreme temperatures and irregular runways.

The King Air 360ER is a great ally when there are lives at stake. The model has a large, pressurized and environmentally controlled cabin that can incorporate medical equipment essential for the rescue of victims who require special care. In addition, the aircraft has excellent range and speed, necessary to transport patients from one point to another with agility.

The Bell 412EPI is highly versatile, safe, and caters to a range of segments including public safety, search and rescue missions, and air rescue, among others. Perfect for any activity that requires a powerful machine with high performance.

The Bell Huey II is what you expect from a multi-mission helicopter. With more than 340,000 hours flown worldwide, the product has proved to be a smart and cost effective solution. Its spacious cabin can carry up to 13 passengers, or be configured to hold up to 6 stretchers. Its wide doors allow easy boarding and disembarkation of large volumes or troops. Its powerful engine facilitates difficult tasks such as hoisting equipment.

The model has a number of safety features, excellent auto-rotation, rupture-resistant fuel cell, protection against electric cable collisions, and an armored cabin, among others, making it ideal for public forces.

The Bell Huey II is the best choice for transporting troops. The aircraft has a wide floor area that can be reconfigured, with several ways to bolt down seats, which gives more flexibility to the product. Its cabin is large and can carry up to 13 passengers. Its wide doors facilitate access to the outside, which is an advantage for missions performed while the aircraft is in flight.

The model can carry up to six stretchers at the same time, making it an excellent tool in rescue missions when the helicopter needs to function as an air ambulance. Its power and autonomy meet the urgent needs that relief work requires.